When the USS America arrived off Vietnam on 12 May it was carrying the first squadron of the new F-4J variant of the Phantom to reach the theater. The F-4J was a development of the Navy’s F-4B and had a more powerful engine, strengthened undercarriage and modifications to the tail plane and wing to permit better handling on takeoff and approach. A flight of F-4Js was attacking a road intersection near Don Cay, 15 miles south of Vinh, when one of the aircraft was damaged by 37mm AAA. Lt Brice’s aircraft was hit as he was pulling up through 4,500 feet, having just dropped his Mk82 bombs on the target. The utility hydraulics failed and the controls were damaged with the throttles stuck in full military power. LT Brice managed to fly the aircraft using rudder only for control. The aircraft crossed the coast safely but about 25 miles out to sea the Phantom caught fire. LT Brice ordered his NFO to eject but the pilot’s canopy then failed to jettison and Eric Brice was last seen desperately trying to push the canopy free so that his ejection seat could fire. Sadly, this was one of many instances when Phantom front-seaters failed to escape from their aircraft. (5) 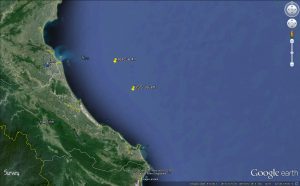 12:55 the USS Jouett’s 1MC announces SAR alert, Big Mother crew and flight deck personnel scramble. Five minutes later the Jouett passes along a steer of 326⁰ / 15 miles to Big Mother. 13:06 – 13:09 Big Mother located overhead wingman, who vectors the helo to the survivor, and helo crew spots a Day Smoke. Inbound approach to the survivor was difficult with the reflection on the water. Big Mother flares, 10-10 drops swimmer. Survivor entangled in his parachute. The swimmer cleared the shroud lines, prepares survivor for pick-up. Aboard the helo at 13:12, the crewmen assess the injuries of the survivor. He has a broken left leg, broken right arm, with multiple cuts and bruises. At short flight back to USS Jouett, landing at 13:18. Survivor to receive emergency medical treatment while still aboard the helo, then taken to Jouett’s sick bay. (3)

Approx. 23 mile off the coast of North Vietnam