A Skyhawk was lost during a bombing raid on Vinh on the 23rd. Lt Christensen left the target and crossed the coast to rendezvoused with other aircraft that had taken part in the raid. As the formation joined up about 60 miles out at sea, Lt Christensen realized he had no throttle control. His engine then flamed out and, despite two attempts to relight, he had to eject. He was soon picked up by a Navy helicopter. (5)

16:42 HC-7 Det 110, standby helo aboard USS Enterprise receives notice over the bullhorn that an aircraft has crashed bearing 259⁰ at 22 miles. Big Mother launches at 16:45, arriving at the scene 16:56, the helo crew observes an orange smoke at two miles. Big Mother flares to drop the swimmer. Swimmer checks for chute entanglement, clears the pilot from his raft and hooks up. First crewman guides the pilot over the pair in the water, set the hook close. Swimmer hooks up and away they go. Arrival at the cargo door, difficulty entering the helo as the aft M-60 mount is in the way. 17:00 recovered downed pilot reported in good condition. (11) Big Mother returns to Enterprise at 17:35. Rescue report states that all helos should have their M-60 mount modified to provide better access. (3) 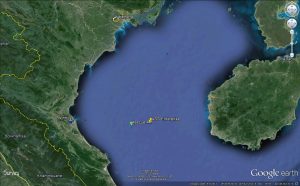