A strike on a road ferry 12 miles west of Vinh was accompanied by a flight of Phantoms to provide flak suppression. Cdr Elliott dropped his bombs on an anti-aircraft gun position and pulled up but as he was passing through 4,500 feet his aircraft was hit by AAA. The hydraulic system began to fail as he headed towards the sea and he had to use the rudder to keep the aircraft straight and level. About five miles off the coast the port engine overheat light came on and the crew ejected. They were both rescued by a Navy helicopter from a SAR destroyer. (5) 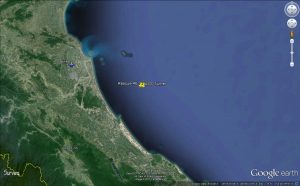 In a repeat of the incident that killed Maj Gen Worley the previous day, “Tex” Elliott’s canopy failed to release after his back-seater’s ejection seat fired. Fortunately, Cdr Elliott managed to push the canopy free and his seat then fired. “Tex” Elliott, VF-33’s executive officer, survived and wrote a report about the problem and it was discovered that a venture effect occurred between 400 and 500 knots that kept the front canopy from releasing. Phantoms were later fitted with gas-operated pistons that pushed up the leading edge of the front canopy after the rear canopy had left the aircraft. (5)

Pilot had extreme difficulty leaving aircraft when canopy would not jettison with use of alternate ejection handle, face curtain, canopy jettison handle, or normal open/close switch. Finally pushed canopy off and then ejected. After ejection and seat separation, he self-initiated chute deployment. (6)

On South SAR station, 17:06 over the USS Turner’s IMC, the helo crew is alerted to a SAR. 17:10 the ship sets SAR alert, received indication that one F4J from VF-33 side number 203 was losing hydraulic pressure and anticipated bailout. Set flight quarters, stationed the helicopter detail. The helo crew is given a steer of 16 miles. 17:16 Big Mother launches, as the Turner and shotgun USS Henderson (DD-785) continue changing course to close on the scene. 17:22 Clementine II has been placed on deck and launches. The on-scene-commander, voice call “Streetcar 315” sighted two good chutes. Big Mother 73 en-route to scene for pick-up. Survivors bear 270⁰ at 0.5 miles from ship. At 18⁰ 57 N 106⁰ 03 E. Big Mother 73 observes A-7 RESCAP providing mark on top of survivors, also locates an orange day smoke. 17:29 Big Mother 73 has picked up the first crewman, he had not uncooked from his raft and the swimmer cut it loose. 3 minutes later the second crewman is aboard the helo. Neither survivor wore helmets during the ascent up the hoist. Both survivors are in good condition, helo returning to this ship. 17:44 Big Mother recovers on the fantail with rescued crew members. Medical examination indicates CDR Elliot has a large bruised area right lateral neck with no other injuries noted, Dambekaln, no injuries noted. 17:45 launch Big Mother 73, 17:48 recover Clementine II, 18:07 recover Big Mother 73, 18:27 Big Mother 73 is launched to return the survivors to USS America. (3)(12)