08:00 USS Intrepid had finished mustering the crew, finding no new absentees; 08:55 a man-overboard alarm is sounded. STARBOARD side, the Intrepid immediately steers to avoid the man in the water.
Big Mother helo returning from SAR station, a mile or two from the carrier, are notified by UHF radio. The helo approaches the stern, the crew spots debris. Two minutes of search required to locate the sailor. Visual sighting, a hover is set, and then the horsecollar sling is lowered. 08:57 sailor is spotted; he was not familiar with the sling, which delayed the pick-up. (10)(12) The carrier’s angel helo was out of position. 09:05 landing on deck was complicated by the excess amount of people on the flight deck. 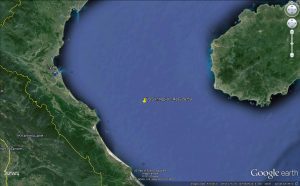