What Happened By: LCDR Kirkpatrick

The frigate assigned to the North SAR station had been relieved by another ship and was heading home. Their Clementine helo crew was to fly to the USS Constellation and then their whole detachment was to be transferred to another ship in a day or two. My crew and I were going to the Constellation. The Clementine pilots were not accustomed to long, over water flights like the Det. 110 pilots, so we determined that we would accompany them.

The Clementine helo was piloted by LT Ron Beougher and LTJG Joe Skrzypek and their two aircrewmen were AE2 Bruce Dallas and ADJ3 Al Salsbury. They were also loaded down with a few hundred pounds of gear & tools, etc. We had a crew of 4, 5 men from the Clementine detachment and 1,100 pounds of their gear. Before we took off, we were informed where the Constellation was, as well as its course and speed so we could determine our course and speed to intercept it. The weather was poor, heavy overcast and strong wind.

After flying for some time, we felt we should be getting close to the carrier, but were unable to establish contact. This caused me concern and I began to worry about how much fuel the Clementine helo had left. I decided we had better get some fuel, so located the carrier, USS Hornet, not too far away and asked if we could come aboard for refueling. They were about to start flight operations and were not too anxious to take us aboard, but we landed and kept the engines and rotors turning while the fueling crews dragged out the fuel hoses to each helicopter. My helo was in pretty good shape for fuel, but I just wanted to be sure fuel would not be a problem for either helo. I watched in my rearview mirror and saw the fueling crew hook up the fuel hose to the other helo. We were full and unhooked. Ron and Joe had just begun to take fuel when the ship told them to clear the deck. They said they were refueling and the ship told them in no uncertain terms to “clear the deck.” They ceased refueling and the hose was unhooked. I reported that I was ready to go and Ron reported they were ready, although they had not fully refueled. I then asked for a steer (heading and distance) to the USS Constellation, our destination carrier.

The Hornet said they would call us and give us our steer en route. The weather was poor and I had little confidence in the ship following through on that promise. I felt the destination carrier was still a long ways away, so after some verbal argument with the ship over the radio, I finally declared that we would not take off until they gave us a heading and distance to our destination. In a few minutes, they grudgingly gave us the information we requested and we left. After flying quite awhile, we were still unable to pickup any navigation signals from the destination carrier and things began to get a little tense. Ron and Joe were ahead of us and decided to change to their most fuel efficient airspeed. They reported they were low on fuel and we still had not been able to establish contact with the carrier. They had too little fuel to return to the Hornet, the carrier where we had refueled, so we had no choice but to press on. We were still in good shape for fuel in our helo, but had been trying desperately to contact any ship or plane in the area to help us find a ship where Ron and Joe might land. Ron and Joe kept reporting lower and lower fuel states and things were really getting tight.

Ron and Joe were 10 or 15 miles ahead of us, when they reported they were about to run out of fuel, so we increased our speed and headed toward them. They reported they were going in. The next we heard on our radios was their emergency survival “beeper” radios. (13:11 helicopter went down at position 17⁰ 26’ 24”N, 110⁰18’18”) (12) We homed in on their radio signals as we all strained to see them. Every set of eyes was working hard to find four men bobbing around by themselves in high seas on an overcast day. 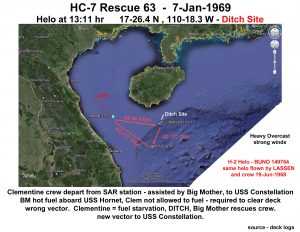 We finally spotted them and began our approach to rescue them. We were very heavy and I feared we might have to throw some of their cruise boxes overboard to have enough power to hover and pick them up remember; we were already carrying 9 people and 1,100 pounds of their gear. This was a heavy load for a SAR helo with all the armor, guns, etc. Here the bad weather actually helped us. The wind was so strong that we had no trouble hovering to make the rescue. The high seas made it a little difficult, but our crewmen did a great job and it worked out fine.

Crowded with cruise boxes and people jammed in virtually everywhere, we once again headed on our way hoping to find our destination. After quite awhile we picked up the ship’s TACAN which told us where they were bearing and distance. They were not anywhere near where they were supposed to be! As we slowed closed on the Constellation, we began to worry about fuel too. We finally spotted the ship and advised them of our heavy load and low fuel state and told them we needed to get aboard immediately. They gave us landing instructions which were not to my liking. They were not going to give us wind down the deck like we wanted, but wind coming from off the starboard side of the ship. I told them that was a problem, but would make one attempt to land and if I felt it was unsafe, they would have to change their course. We made our approach to the ship, determined it was safe and landed. We were obviously all very happy to be aboard a ship rather than bobbing around somewhere in the South China Sea.

The investigation, which followed, revealed several mistakes along the line. The USS Constellation, our destination carrier, was not doing what we were told. It had been relieved by another carrier and was heading for home on a different course than was reported and at a high rate of speed they were going away from us at 30 kts!. (15-20 kts) (11) The fueling crew that serviced Ron and Joe’s helo on the other carrier had trouble getting the hose attached and they got very little fuel before the ship ordered them to clear the deck. They thought we were close to their designation, so didn’t insist on getting more fuel and didn’t report that they had failed to take on a full fuel load. They reported that they were ready to go and I had seen the fuel hose attached to their helo, so believed they had a full load of fuel. The third and final error that clinched the deal was that the bearing and distance information we received from the Hornet, where we stopped to refuel, was wrong. The bearing was off by about 40 degrees (31⁰) (11) . That was a very nerve wracking day and I’m thankful it turned out okay for all of us. We could easily have lost four squadron mates in addition to a helicopter that day. (10)

This sounds like one of the Dets. I was on. We were heading back to the Philippines. I was in the H-3 and they were helping us with all our supplies, and people over to the carrier we were to ride back to the Philippines on. The H-3 came to the DLG ship we were on and picked up most of our crew.The others were in the H-2. Then we were off both flying together. Both Helos landed on the USS Hornet to “Hot” refuel.

Both Helos were running and rotors turning. The Hornet wanted us off there in a hurry. So they could launch their aircraft, I guess. For some strange reason our little H-2 would not Hot refuel, we never had any problems on the entire Det. with any refueling problems. (Ken Kirkpatrick – Hornet told H-2 to “CLEAR THE DECK”) The H-3 that I was in was able to refuel ok. The Hornet gave them a vector and the pilots made a decision that they had plenty of fuel with about 30 to 40 minutes to spare to get to the carrier we were riding back to Subic Bay..

The next thing I remember after we were flying for quite some time. We were hovering over them picking them out of the water. We heard later that the Hornet gave the wrong vector. We caught hell for losing this little helo when we got back to Atsugi.
The funniest thing was that before we left the DLG ship we were on (you know we always got a souvenir from the ship to take back to Atsugi) someone got the ships plaque off the wall of the ship. Tried to find a good place to hide this plaque from our pilots and the ship in case they come looking for us. Just so happened the plaque fit just perfect under one of the pilots seat cushions in the H-2, they never knew it, of course it went down with our H-2 in the ocean.
SeaDevil ADJ-3 John R. Southard – (email 6-21-2015) (10)

Bruce Dallas : The H-2 was the same one we had used to make the rescue with LTJG Clyde Lassen, LTJG Leroy Cook, AE2 Bruce Dallas and ADJ3 Don West. Also the H-3 did not put a swimmer in the water, as they were already in the water.