The USS Bon Homme Richard lost another Crusader when an aircraft developed an engine problem while on a CAP mission. The engine began to lose trust as fuel and smoke were seen to be streaming from the aircraft’s tailpipe. As an explosion appeared imminent, the pilot ejected and was rescued from the sea. (5) 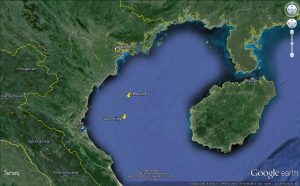 At 10:31 the USS King is notified of a pending SAR emergency. Changing course to get wind across the deck, launches helo at 10:34.(12) A pilot who ejected from his crippled aircraft was rescued by a UH-2 crew from HC-7’s Det 108 deployed aboard the USS King. Although three sharks were in the vicinity, AMS-3 Charles F. Johnson went into the water from the helo to aid the survivor. The crewman untangled the survivor’s legs from a life raft lanyard and then both men were hoisted aboard (11:07) (12) the SEASPRITE. Lt Lloyd L. Duncan was pilot of the rescue helicopter and Lt(jg) Richard W. Basore was copilot. Operating the hoist was ADJ-2 Joseph M. Parlato. (11) 11:11 Clementine is recovered aboard USS King, survivor is aboard in good condition. (12)