One of the worst air accidents suffered by the Marines during the war in Southeast Asia took place on 18 May near Phu Bai, just south of the DMZ. Two Phantoms from VMFA-314 were plugged into a KC-130F tanker taking on fuel when a Phantom from VMFA-542 on an opposite track slammed into the tanker’s starboard wing near the Number 3 engine. The crew from one of the VMFA-314 fighters managed to eject over the sea after jettisoning their bombs and the other aircraft (flown by Maj A. Gillespie and 1 Lt V. Maddox) returned safely to Chu Lai. Tragically, the VMFA-542 aircraft and the Hercules crashed with loss of all on board. 1Lt Pigott had recently arrived in theatre and was on an operational mission (11) with an experienced navigator. (5)

At 12:05 on 18 May 1969 the Marine Corps KC-130F tanker departed Da Nang AB on a routine operational tanker mission. The aircraft continued to the Hue Phu Bai Area for the in-flight refueling mission. The tanker had departed its assigned track by and was proceeding toward the ocean before turning southeast to Da Nang. The KC-130F proceeded southbound for the Hue Phu Bai airfield area while refueling two US Marine Corps McDonnell F-4B Phantom fighter aircraft (152270 and 151450). All three aircraft were descending in a “tobogganing” maneuver while heading southbound in the vicinity of the South Vietnam Coastline.

At the same time a separate USMC F-4B Phantom (151001) was heading in a generally westbound direction toward the Hue Phu Bai military area. 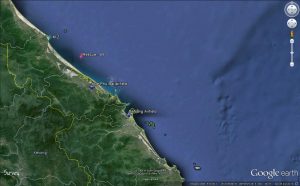 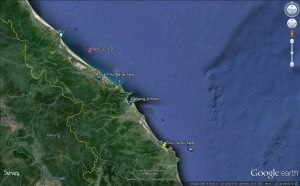 The two aircraft approached each other nearly head on with a closing rate of approximately 700 knots true air speed. The initial impact by the F-4B was in the vicinity of the number four engine and the starboard refueling pod on the KC-130F. The radome on the F-4B cleared the propeller on the number four engine as the cockpit initially impacted with it.

The single F-4B crashed and the pilot and RIO died instantly. The KC-130F crashed into the sea. One of the refueling F-4B’s was severely damaged from the initial crash debris. Phantom 151450 plugged into the starboard drogue, was sprayed with fuel and apparently ingested an undetermined amount of debris into both engines. The F-4B aircraft flipped uncontrollably to an inverted position while the drogue and a portion of the hose remained attached to the aircraft. Its engines could not sustain power and the fighter crashed at sea. Both crew members successfully ejected and were recovered. The second refueling F-4B fighter, 152270 was plugged into the port refueling drogue and sustained limited damage in the form of two small holes in the port aileron and a 1/2 inch hole in the starboard wingtip. The pilot observed the spinning tanker, and when it was apparent he could render no further assistance returned to Chu Lai Air Base without further incident. (6)

***
Re: the May 18, 1969 rescue (69) of the two Marines after the F-4 collision with the C-130 that was performing in-flight refueling of two Marine F-4s, we were there – en-route to DaNang in a “Protector” H-3, with VADM Bringle, Commander, Seventh Fleet onboard! (As an aside, after the Admiral hauled those two guys aboard, we considered him qualified for a Sikorsky Winged “S.” which he received in an awards ceremony in Atsugi later that year),

Anyway, we were “feet wet,” just below the DMZ, heading south, when we observed a huge fireball very high in the sky off to our right (say, 2 o’clock, at about 3 miles). We turned toward the flash, saw one chute descending, headed toward it, climbing to get a closer look. At this point, we had no idea what had transpired, except to note that as we got closer, the sky was filled with “shiny” pieces — and, later, we were able to identify what seemed to be aircraft insulation — all descending toward the sea.

We followed the “chute,” ascertained that no one was aboard — it landed in tall grass just behind the coastline. We heard chatter on the air to the effect that the Marines were sending some helos into the air to search for survivors; after a short while, we saw several H-46s enter the area, and, as the Admiral had an “time-sensitive” engagement in DaNang, we turned over with the Marines on Guard frequency and departed the area.

About 8 miles south of the search area, we observed rafts in the water, flew down for a look-see, found two aviators in the rafts, and went in for a pick-up. I have forgotten their names (they are in the record of SARs, I believe — a Marine Captain, and a Major). As I said, VADM, Bringle helped haul them aboard, they had no visible injuries, and requested/ demanded we take them home to Hue. Well, not having any comm plans or clearance for in-country ops, and in light of the Admiral’s schedule, we flew our “rescuees” into DaNang,

We landed on the Air Force side, had an ambulance come for them, they REALLY wanted to go to Hue,( VMFA-314 was based out of Chu-Lai) (11) but the USAF Medics prevailed for the time being, particularly as these two had just been witness to the loss of several lives – in the C-130, and the F-4 that collided. As I recall, we returned to the carrier on Yankee Station that afternoon.