The Coral Sea also lost an A-7 on the 15th when an aircraft on an escort mission developed an oil leak that eventually led to engine failure. The pilot ejected and was soon picked up. (5)

I don’t remember the names and I suspect we did not know who they were at the time. I doubt it was a classified mission but it could have been. (2) 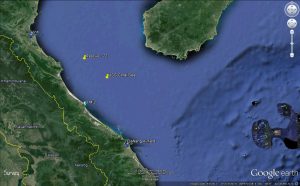 The attached picture is a charcoal drawing one of our troops (AME3 Richard Talpey) made when the helo landed on USS Coral Sea. The helo returned the next day and the ship filled it with as much ice cream as they could take on.

I sure wish I could catch up with the crew who rescued me. I figure I owe them four bottles of Jim Beam. I live in Columbia, SC and I was wondering if an old attack pilot could come to your reunion in Charleston? Thank you, John E. Voshell (2)