USS Mars enroute from DaNang, South Vietnam to Yankee Station. The Helo crew starts Vert-Rep operations at 08:01 this day. The first ship for replenishment was USS Camden (AOE-2) for helo 56, while helo 57 began with USS Rainier (AE-5) at 08:06. While Vert-Rep ops continued, Protector helo #42 arrived at 10:52, with RADM Ramage, Deputy Chief of Staff for Ops and Plans for an official visit, departing at 13:00. Late afternoon USS Mars at 16:52 completed the Vert-Rep of tin can USS Buckley (DD-808) and began supply lifts to tin can USS Hull (DD-945). High Seas and winds (5), the ship was rolling about 30⁰. Trodahl (HAC) tried to get the load on the deck from the right seat. Switched it over to Lackey (the nugget) in the left seat. The ship’s crew runs out to secure the load; a huge wave knocked two cargo handlers into the water. (10) 17:50 USS Hull reported that two men are over board. USS Hull immediately changes course to avoid the sailors in the water, as Helo 56 approaches. USS Mars cancels the Vert-Rep operation to the USS Hull. Helo 56’s crew rigs the hoist and locates the sailors within the high seas in the wake of the ship (10) at 17:57, pick-up of the wet and scared sailors. Hoisted from helo, back to their ship, the sailors receive medical assistance. 18:03 Helo 56 is aboard USS Mars makes way for USS Constellation (CVA-64). (12)(13) 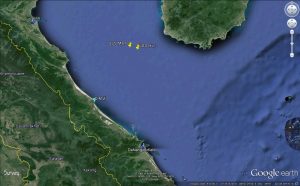 08 Dec 1969 HC-7 Rescue Log/see page 3 – Two Hull crewmembers, Couch and Haley, washed overboard along with frozen meat boxes and rescued, thanks to sharpshooters keeping the sharks away. Gary recounts; I was 3rd person washed overboard but got hung up on the life line by the back of my lifejacket and was pulled back up by some of the guys in the working party.
Compliments of Gary Blanchard BM3 ’66 – ’70 (14)