A Phantom from the Coral Sea was lost due to a rare failure of a tanker aircraft not being in the correct position to give fuel when it was needed. The Phantom eventually ran out of fuel, the engines failed and the crew ejected and were rescued from the sea. (5)

USS Horne received the SAR alert at 15:12, changes course to obtain wind across the flight deck. USS Horne detaches USS Hoel (DDG-13), the shotgun to new station, 000⁰ at 5 miles. Both helos are away. Horne continues to steer toward the scene. Both pilots are aboard helos at 15:27. At 15:29 the two helos are recovered, with pilot and RIO, pilot was LTJG YOUNG, RIO was LT GICHLRIST. (12)

We were on SAR station when the call came out that two MIGs were heading out from the coast. BARCAP responded, which were two F-4 Phantoms. The MIG’s turned and ran and the F-4’s took up the chase. I believe it was the USS Long Beach that notified the F-4’s that two more MIG’s had come up from tree top level. The F-4’s turned and went into burner trying to get feet wet. One aircraft called low fuel and a tanker was launched from the Carrier. We were vectored around the area until the F-4 called “hooked-up” with the tanker, as soon as the call was made a second call came, “Flame Out”. The wingman called the ejection and we started circling in the area along with an H-2C. The cloud cover was about 300 ft. AGL, so all heads were out the windows, not wanting one of the two to come through the rotors. We spotted the chute about a quarter mile off our 1 o’clock position and proceeded in to do a textbook pick up. The SAR swimmer, Larry Parker did not have to do a 10 and 10 because the pilot in the water would have climbed a rope to get in the helo. Once the RIO was secure in the helo we started looking for the second aviator. He was spotted in the water but the H-2 crew were going nuts over the radio because they were fearful that we would pick up both of the downed crewmen. Lieutenants Allen and Everett, being true Officers and gentlemen held a position off the second aviator and talked the H-2 onto the pilot’s position and allowed that crew to do a SAR pickup also. (HC-7 rescue 76) 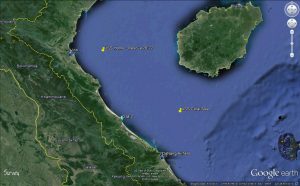 I never had the opportunity to tell those gentlemen how much I admired what they did that day or how much of an impression it made on me. I have used that logic several times in my life and always thought about the day those two men taught me a lesson in respect.