When returning from BARCAP mission a Phantom crashed following an accidental fire and explosion that led to the loss of control. Both the crew ejected over the Gulf of Tonkin about 90 miles northeast of Dong Hoi. The aircraft was diving at high speed and the force of the ejection stunned both men. Lt Cropper, the NFO, appeared to be unconscious when he hit the water and he was unable to inflate his life jacket or release his parachute. The parachute quickly sank beneath the waves taking Lt Cropper with it. Lt Terrill was eventually rescued from the sea. (5) 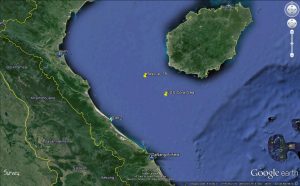 At 07:35, USS Coral Sea releases the USS Parsons (DDG-33) to depart the formation for independent steaming exercise. 07:52 the USS Coral Sea receives a report that the pilot and RIO ejected from VF-161, the aircraft crashed at sea, position 18⁰10’N 108⁰00’E. 07:53 Big Mother helo dispatched to the SAR scene. (12) While on a logistics run to NSAR, PROTECTOR helo vectored to the SAR scene. (10) 07:54 the USS Coral Sea receives a report that two good parachutes were sighted. 08:12 the SAR helo is on the scene, 08:22 pilot Terrill has been picked up. 08:24 USS Parsons is ordered to proceed to the SAR scene. 08:52 SAR helo and pilot Terrill arrive aboard USS Coral Sea. Pilot had sustained moderate injuries the extent of which are not known. 09:32 received report from sickbay that injuries by LT T. J. Terrill included two broken bones in his arms and a severe sprain in leg. USS Coral Sea continues flight operations, and Vert-Rep from USS Mars. At 22:00 the SAR effort for LT C.H. Cropper is terminated, Presumed dead. The USS Parsons returns to carrier formation at 23:01. (12)