As a Skyhawk was returning to the Shangri-La it made an unsuccessful attempt to refuel from a tanker. The Skyhawk subsequently ran out of fuel and had to be abandoned. (5)

Statement of LT R.W. Griffith (3A) (with crew inserts)

At about 02:58H on 28 April 1970 onboard USS Ranger (3B) CVA 61, I was awakened by telephone. We were asked to standby for a possible launch. I immediately sent the first crewman, AE3 Little to get the second crewman, ADJAN Wadsworth.(3B) An alert had sounded and the SAR crew was to man the aircraft. I quickly donned my flight gear and proceeded to the flight deck. I boarded and found LT Poole just strapping into the left seat. As soon as the plane captain had set brakes, I climbed into the pilot seat and immediately gained radio communications. We were instructed by the tower to engage rotors and stand by to launch. After engagement, a hoist discrepancy was noted, but a troubleshooter was standing by and quickly corrected the problem. An expeditious systems check by AE3 Little (3B) was completed and at 0310H an ASE on BAR ALT on launch was executed. (steer of 60 miles – (3) )(37 miles southwest of USS Shangri-La) (3B) 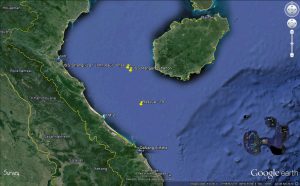 I initiated a max performance climb to 1,000 feet, we checked the WG-1 compass setting and turned to the initial heading of 167. We switched to RANGER Striker, got an update on conditions at the scene, were switched to USS SHANGRI-LA CVA-38 strike frequency for control and continued. (3A) Shortly an aircraft, apparently launched from SHANGRI-LA, passed our nose within 500 yards of our flight path. It was necessary to descend to the right to ensure adequate separation. After informing SHANGRI-LA of the incident, we continued en route. Within a few minutes we were switched to SAR PRIMARY frequency 364.2 monitored by a destroyer call sign “BLUE BOLT”. “BLUE BOLT” had an IFF position of 147 degrees at 47 miles from our position. An aircraft, call sign “PALMETTO 12” was orbiting the scene as on-scene-commander and had radio communications with the survivor. We contacted “PALMETTO 12” within 40 miles of the scene and learned that the downed pilot, an A-4 driver call sign “CLINCHER 413” was in excellent condition and awaiting us. We determined at this time that we were either the lead aircraft, or the only aircraft enroute. First crewman AE3 LITTLE then requested interior cabin lighting. I transferred the aircraft control to LT Poole and switched the appropriate lights on. (3A)

I could see that the second crewman ADJAN WADSWORTH was rigged for water entry, but I (was) determined to drop the swimmer only if absolutely necessary, On-scene-commander stated the A-4 pilot appeared unhurt. In addition, an in-flight procedure check list showed a continuous memory light with suspected transmission chip indications. A caution panel light flicker caught my eye at this time. Transmission oil hot light with the gage needle approaching 150 degrees C was the cause. LT POOLE immediately began a descending left turn, slowed to 70 knts and made a voice call of our situation to advise as a precautionary measure. As anticipated, within a few minutes, the temperature dropped to 120 degrees C, and we again reversed course. Observed parachute flares at an estimated 15 miles. “BLUE BOLT” continued to give vectors and updated steers until the scene was in sight. Arriving on the scene at 500 feet, we were called on guard by “BASKETBALL 890”, an orbiting Air Force C-130. He told us that he had assumed on-scene-commander and informed us of “PALMETTO 12” on SAR PRIMARY. He said to come up on guard which I did, but I informed him that I was switching back to SAR PRIMARY. Five miles out, “BASKETBALL 890” called “PALMETTO 12” and informed him to come up on GUARD, which he did. “CLINCHER 413” came up on his survival radio. We descended to 200’, got an on-top position from “PALMETTO 12” who dropped a smoke and gave us surface winds of 060º at 15-20 kts. At approximately 03:40 we passed over the survivor slightly to his southeast heading 060. We called for “CLINCHER 413” to light off a night flair and started a level left turn. When directly upwind of the survivor heading crosswind, I ordered after station to drop a smoke and took control of the aircraft from LT POOLE. I switched on the flood lights and spot light at the 180º position and began a descent to hover altitude. By this time, the survivor’s flare had gone out, and since he could not get to his strobe light under his floatation gear there was no visual contact as the aircraft passed over the survivor at a slow air speed. I attempted a visual search with the spot light, but horizontal reference was very obscure, and aircraft control was quite difficult. “CLINCHER 413” then stated that he was at our 5 o’clock position at 50 yards, so I determined to commence a slow backing up action at 60 feet on the radar altimeter. In a short time “CLINCHER 413” called us at our one o’clock position. I turned the spot light slightly right and held him visually at about 75 yards. LT POOLE called visual contact and instructed him to get out of the raft while I slowly edged closer, backing visually with the spot light, until he was about starboard of the nose. After station picked him up visually at this time and directed me over his position. I repositioned my spot light forward, turned off the flood lights and concentrated on keeping a stable hover. Outside reference was limited to two distant flares at 360º and 045º relative, and the lighted arc of the spot light. Quite a bit of difficulty was experienced in sustaining a position over the survivor with the limited visual references. LT POOLE backed me up on the collective at all times and the radar altimeter proved invaluable as there was constant danger of backing down. (3A)

At one time LT GRIFFITH started rapidly toward the water and I called for altitude with no apparent response. He had passed through 20’ and approaching 15’ when I pulled up sharply on the collective putting us at 40’. LT GRIFFITH then went into a stable hover and the crewman reported that the survivor had hooked up and was being hoisted aboard. (3B)

I gave the second crewman the door and I took over the hoist and lowered it to the water. After the pilot got a hold of the cable and hooked himself up we raised the hoist and got him into the helo. I want to compliment the second crewman on a real good job of talking the pilot into position over the man, and the pilot and co-pilot for their great job of handling the helo with an emergency of our own about. We had the pilot lay down and covered him with blankets after checking him over. Due to the high temperature light we had earlier, we decided to leave his swim gear on until the man was on the carrier. (3C)

There was more than enough work for two pilots.(3A) It was the hardest I had ever worked in the cockpit. (12) After what seemed to be an extremely long time the survivor secured himself to the cable and after station reported he was clear of the water. At 03:50 I broke hover and climbed to 1500’. The transmission oil temperature was stable at 100ºC and max torque at no time exceeded 85%. I determined the pilot’s name was John Filose from VA-12 and that he was in excellent condition. We called for pigeons to RANGER and received vector to return and recovery aboard at 04:40H. (3A)

On the way back to the carrier, we met up with two other helos and were escorted back by them. I think the way every one handled themselves and stayed calm was outstanding. Also, the lighting over the area was very well done. (3C)