Big Mother had landed to refuel at 13:01 taking 180 gallons of fuel. The 311th helo landing aboard the USS Chicago. Launched at 13:02 to continue preposition SAR operations. (12)

Returning at 14:12 on 06 March 1972, I was preparing to turn final for a landing aboard the USS Chicago (CG-11). Co-pilot Reynolds had completed the check list before landing. (7b) I had just received clearance to land when the controller advised; “Red Deck”, man overboard port side! I broke off the approach, made a turn to bring my helo up the port side of the ships wake, and ordered the landing gear raised and rescue hoist rigged. The survivor was spotted immediately. The wind was light and 90 degrees to port. We had less than 1000 pounds of fuel. Considering all factors, including the close proximity of a NVN fishing junk, I commenced an immediate approach to a 15’ hover. As Gaynor lowered the hoist and A03 Hilyer directed me over the survivor. The survivor entered the horse collar in¬correctly, face down (7) and could have fallen out if the hoist operator had not raised him very slowly. (3) The crewmen used the grappling hook to retrieve the life ring 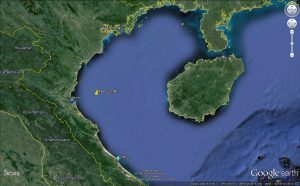 The total rescue took four minutes. No swimmer was placed in the water because of lack of time to don swim gear. (7)

Man identified as Wyatt, Redmond. Ship was at flight quarters to recover Big Mother. Wyatt was observed by two men to climb outboard of lifeline and jump. He is currently in ship sickbay, no apparent ill effects, and will be transferred 7 March to Hospital for psychiatric evaluation. (11)