The skipper of a Nationalist Chinese ship was airlifted to a US military hospital late Saturday afternoon after a complicated air-sea rescue mission involving both U.S. Air Force and U.S. Naval units.

Returning to Clark, the chopper developed engine trouble and was forced to ditch at sea about 95 miles out from Subic Naval Base and adjacent to NAS Cubi. 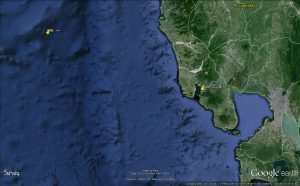 A Jolly Green Giant from (SH-3A – SeaKing HC-7 ) Cubi AS picked up the downed crew and their ailing patient about 5:30 p.m. Navy PO2C Tinsley of Aurora, Colo, second crewman on the Cubi rescue helicopter, descended into the water to aid in the rescue. (3) Tinsley helped the downed men into the rescue lift apparatus, completing the rescue operation at 6:05 p.m. (5)

There were no injuries as a result of the ditching, and the ship’s master was reported resting in the Naval Hospital at Subic. The Air Force crewmen of the downed HH3 were returned to Clark AB.

Meanwhile, darkness at sea had taken its toll as the Navy patrol boat Welsh, dispatched from Subic in an attempt to put the stricken Jolly Green Giant undertow, was forced to curtail the salvage attempt and the helicopter sunk. (3)

During the completion of in-flight refueling, at disconnect the C-130 saw smoke coming from the transmission area of the helo. The helo pilot jettisoned the wing fuel tanks and lowered to the sea. Settng the helo down on the water and shut down, the crewman found that there was a crack in the transmission that was leaking fluid onto the engine, causing the smoke. The crew checked the dry bays for water, all was dry.

The crew heard that a Navy H-3 was en route, so as not cause rotor down wash, they entered life rafts. In calm seas, concerned about the rotor wash from the coming helo would upset their helo, they moved away from the helo, and waited for the Navy helo. As the rescue bird approached the crew left their bird. The windows, doors and dry bays were left open.

The crew was picked-up by the HC-7 Navy helo at dusk. The USAF C-130 assisted the directions back to Cubi. The C-130 landed at Cubi to pick-up and transport the crew back to Clark AFB.

During the night a squall blow in, filling the helo with water. The Navy gunboat could not find the ditched USAF H-3. A Navy P-3 assisted in the search and directed the boat to the helo. The helo was nose down, with only the tail above water. The boat didn’t hook on to the helo as the USAF was coming with an Apollo collar to attach to the helo. Waiting the helo sunk. (7)

After promising to give you info on your unit’s rescue of me and my crew, it took a while for the courage to write about it. That was my third crash so you can probably understand the trauma of it multiplied by three. This one included sighting sharks within 10 feet of me three times and on my return to Clark AB that night the Red Cross notified me that my father was not expected to live and come home immediately. I took emergency leave, went home, buried him, and returned to Clark for the criticism of the investigating board. I think they expected me to grab the machine by my right hand and tow it to Subic. But enough of that smoldering anger, the story follows;

I received a call from 13th AF rescue coordination center requesting pick of a person from a Chinese ship who was having a heart attack. ( it was gall stones I think). Anyway, all of my crews and all but two choppers were in Vietnam. That left only me and one crew to respond. We did and took a doctor from the Clark AB Hospital. It was his first mission. Don’t think he ever flew again! We were given the ships position. I flew to that area using the Subic TACAN station(tactical air control and navigation) station. There were two of these station at Subic, one for airway navigation and one for terminal landings. 13th AF used the wrong station to plot our location which sent the surface rescue group to the wrong point. Anyway, I had no trouble locating the ship, lowered a para-rescueman onto the ship to determine it was the right one and if so to load the person on the hoist for recovery. We did that and began our return trip. A tanker airplane was necessary since we could not go outbound this distance and get back to land without air refueling. I had 13th AF divert one of my HC-130 tankers to the point of pickup. We headed back to Subic and I hooked up on the tanker and took on the required amount of fuel. As I began to unhook the safety observer in the tanker said “you are on fire”!!!

At that moment, I noticed the oil pressure drop to zero. I put it into the ocean while the tanker orbited our point of landing. The Jolly Green is an amphibious aircraft but the seal leaked, we took on water, and guess what, the manual water pump failed so I am faced with a sinking ship. We got out in a 20-man life raft and I told our tanker to call Subic for helo support. Your unit responded. Upon arrival of the chopper I sent the crew, one at a time into the water for pickup. You must get out of a life raft or the chopper down wash was will turn it over and increase your chance of drowning. I went last. Upon getting into the water and waiting for pick up a shark appeared about 10 feet in front of me. His beady eyes were terrifying!! I prayed. He ambled off to my right. The first pick up attempt failed. While waiting for the next run, I looked down and observed a huge group of small fish sucking on by flight suit. All of a sudden, they disappeared and I looked for another shark. Finally, found him behind me about 8 or 10 feet away. Can still see those beady eyes. I prayed and he left. I will not even wade in the water at the sea shore since that day. We returned to Subic and then to Clark. Upon return to home base, the Red Cross informed me of my Father’s pending death. I went home, buried him, and came back to Clark where we were packing up for return to the USA. This increased my post trauma stress if that is possible.

Paragraph two: My children thank you, my wife thanks you, and so do I. I retired in 1983 and have led a productive life serving the people of Wynne Arkansas. Have worked in the building materials business, law enforcement, banking, mayor of the city, and am a deacon in my church. The additional “duty” jobs I have had are raising money for girl and boy scouts, Red Cross, scholarship support for single parents so they can get off welfare and become taxpaying citizens, and during the school year I read with 3rd grader 2 hours each day. I tell you these things not to highlight myself but to say your dedication and actions has improved the quality of life for me and my family and over 400 third graders. So, again thanks and tell all your people to volunteer and help their community. (6)