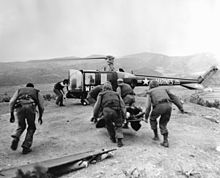 The Sikorsky S-52 was a utility helicopter developed by Sikorsky Aircraft in the late 1940s. It was used by the U.S. Navy, Marines, and Coast Guard.[2] The S-52 was the first US helicopter with all-metal rotor blades. A two-seater, it was developed into the four-seat S-52-2. It was designated HO5S-1 by the U.S. Navy and Marine Corps; HO5S-1G by the Coast Guard; and YH-18A by the Army.

The Navy operated the aircraft as a utility type, and it was used by the Marines for observation and scouting in Korea,[6] where the HO3S proved more popular. Four S-52s were evaluated by the United States Army for utility use in 1950, as the YH-18A, but not purchased in quantity.[3]
Many of the former military HO5S-1 units were demilitarized, rebuilt, and licensed as civil aircraft by Orlando Helicopters, who acquired the parts inventory from Sikorsky.