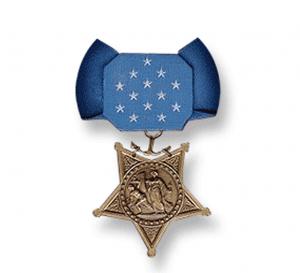 The MEDAL OF HONOR to
LT(j.g.) John Kelvin Koelsch, United States Navy
For service as set forth in the following
CITATION

For conspicuous gallantry and intrepidity at the risk of his life above and beyond the call of duty while serving with a Navy helicopter rescue unit.
Although darkness was rapidly approaching when information was received that a marine aviator had been shot down and was trapped by the enemy in mountainous terrain deep in hostile territory, Lt. (J.G.) Koelsch voluntarily flew a helicopter to the reported position of the downed airman in an attempt to effect a rescue. With an almost solid overcast concealing everything below the mountain peaks, he descended in his unarmed and vulnerable aircraft without the accompanying fighter escort to an extremely low altitude beneath the cloud level and began a systematic search.
Despite the increasingly intense enemy fire, which struck his helicopter on one occasion, he persisted in his mission until he succeeded in locating the downed pilot, who was suffering from serious burns on the arms and legs. While the victim was being hoisted into the aircraft, it was struck again by an accurate burst of hostile fire and crashed on the side of the mountain.
Quickly extricating his crewmen and the aviator from the wreckage, Lt. (J.G.) Koelsch led them from the vicinity in an effort to escape from hostile troops, evading the enemy forces for 9 days and rendering such medical attention as possible to his severely burned companion until all were captured.
Up to the time of his death while still a captive of the enemy, Lt. (J.G.) Koelsch steadfastly refused to aid his captors in any manner and served to inspire his fellow prisoners by his fortitude and consideration for others. His great personal valor and heroic spirit of self-sacrifice throughout sustain and enhance the finest traditions of the U.S. Naval Service. 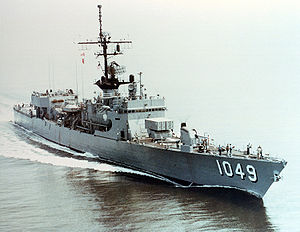