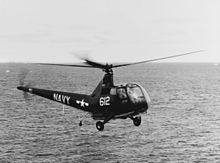 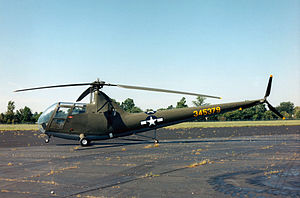 The Sikorsky R-6 was an American-built light two-seat helicopter of the 1940s. In Royal Air Force and Royal Navy service, it was named the Hoverfly II.

The R-6 Hoverfly II was developed to improve on the successful Sikorsky R-4. In order to enhance performance, a completely new streamlined fuselage was designed and the boom carrying the tail rotor was lengthened and straightened. The main rotor and transmission system of the R-4 were retained.[1] Sikorsky allotted their Model 49 designation to the new design. Later, dynamically-balanced modifications to the rotor were carried out by Doman Helicopters Inc. The new aircraft could attain 100 mph compared with 82 mph by the earlier design.
Initial production was by Sikorsky, but most examples were built by Nash-Kelvinator. Some of the later aircraft were fitted with more powerful engines.

The first R-6s were delivered to the United States Army Air Forces (USAAF) in late 1944 and some were transferred to the United States Navy (USN). It was initially intended to pass 150 R-6s to the Royal Air Force (RAF), but delays caused by the switch of production from Sikorsky’s factory at Stratford, Connecticut to Nash-Kelvinator at Detroit Michigan meant that only 27 R-6As were actually delivered to the RAF as the Hoverfly II.[2] 15 of these were passed on to the Royal Navy’s Fleet Air Arm (FAA).[3]
Some of the RAF examples were allotted to 657 Squadron RAF for proving the use of helicopters in the Army Co-operation role, and two external stretchers could be fitted to the fuselage. 657 Squadron operated their Hoverfly IIs as Air Observation Posts, spotting for Army artillery units. The Hoverfly IIs remained in operation until April 1951, and one squadron example was displayed at the September 1950 Farnborough Air Show.[4]
The FAA used their Hoverfly IIs in the training and liaison roles. Naval units to use the type included 771 Squadron from December 1945, followed by 705 Squadron.
The USAAF operated their R-6s in secondary roles and the survivors were redesignated H-6A in 1948. The USN examples were designated the HOS-1 and a further 64 were intended to be transferred from the USAAF, but this did not take place.
Disposals of surplus military Model 49s were made in the civil market in the late 1940s but none now remain in operation. Four are currently displayed in US museums.[5]