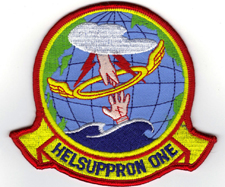 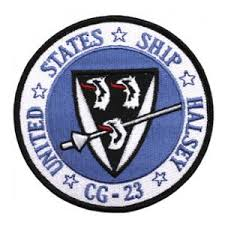 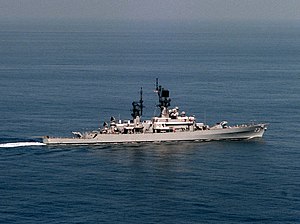 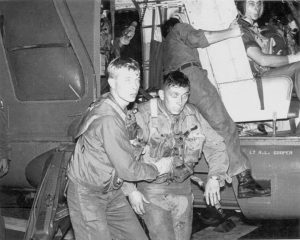 “This was one of many rescues by HC-1 Det 9’s Clementine Two from USS Halsey (DLG-23), stationed at South SAR. Lieutenant Robert Cooper and his copilot Lieutenant Junior Grade William Ruhe, Jr., with first crewman ADJ Airman Recruit P.J. Meier (he was a great crewman but his choirboy good looks must have hidden some mischievous acts) and second crewman ADJ2 Robert J. Wall, in the “Grey Ghost,” their UH-2B, for SAR.  The attached photo is a famous one and tells The REST of the Story of the rescue of Vic Vizcarra which is mentioned in the documentary, “The THUD PILOTS etc. Vic was picked up from the darkness of down in the jungle and hoisted up to a black silhouette above him. Being a US Air Force “fighter pilot” (The AF calls all their planes which are not big bomber or cargo planes “fighters.” But the Thud, while perhaps capable of a dogfight was not really for that but was for tactical bombing), he did not know one helicopter from another and SURELY this was the case for a NAVY helicopter. Heck our guys didn’t know much more than if him they knew more.  He just assumed he had been rescued by the USAF as he had not been briefed in detail about Navy SAR. SO he was a bit surprised when one of the crewmen tossed him a life jacket to don. He thought to himself that he really had a small chance of going down into the Mekong River, the only body of water in his Op Area.  When they landed aboard Halsey, he still had no idea he had been 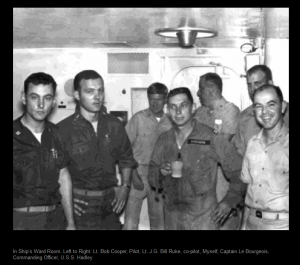 rescued by the Navy. Pitch dark by then, and as he stepped down to the flight deck, assisted by Airman Recruit P.J. Meier, he and PJ were both surprised by a bunch of flash bulbs going off as several men captured the great moment in the history of USS Halsey. The flashes clearly startled Vic and PJ, but Vic’s swarthy complexion was a better contrast to his wide WHITE eyes than the actual same expression on PJ (take a look and you will see ).When this particular photo was developed, the amused sailors posted it on the mess decks as a photo caption contest. The Winner?  “A SHIP? I thought I’d been RESCUED!”

SCPO Curt Venable says first crewman was P.J. Meier and second crewman ADJ-2 Wall. Meier is the man helping Vizcarra down from the helo and Venable is the man looking in the cabin.”                LCDR Tom Phillips, USN (Ret.) 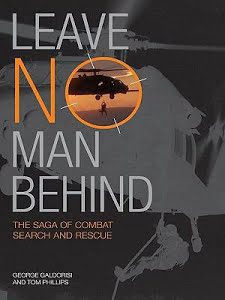 Leave No Man Behind: The Saga of Combat Search and Rescue 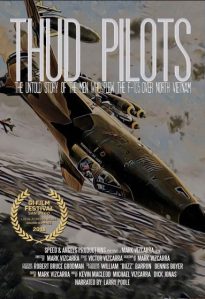