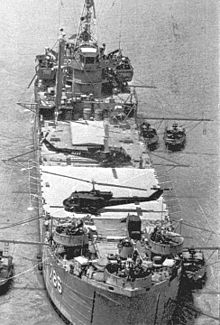 The Bell UH-1 Iroquois (nicknamed “Huey”) is a utility military helicopter powered by a single turboshaft engine, with two-blade main and tail rotors. The first member of the prolific Huey family, it was developed by Bell Helicopter to meet a United States Army’s 1952 requirement for a medical evacuation and utility helicopter, and first flew in 1956. The UH-1 was the first turbine-powered helicopter to enter production in 1960 for the United States military, and more than 16,000 have been built since.[1]
The Iroquois was originally designated HU-1, hence the Huey nickname, which has remained in common use, despite the official redesignation to UH-1 in 1962.[2] The UH-1 first saw service in combat operations during the Vietnam War, with around 7,000 helicopters deployed. The Bell 204 and 205 are Iroquois versions developed for the civil market.

In 1952, the U.S. Army identified a requirement for a new helicopter to serve as medical evacuation (MEDEVAC), instrument trainer, and general utility aircraft. The Army determined that current helicopters were too large, underpowered, or too complex to maintain easily. In November 1953, revised military requirements were submitted to the Department of the Army.[3] Twenty companies submitted designs in their bid for the contract, including Bell Helicopter with the Model 204 and Kaman Aircraft with a turbine-powered version of the H-43. On 23 February 1955, the Army announced its decision, selecting Bell to build three copies of the Model 204 for evaluation with the designation XH-40.[4]

Model 204[edit]
Main article: Bell 204/205
Powered by a prototype Lycoming YT53-L-1 (LTC1B-1) engine producing 700 shp (520 kW), the XH-40 first flew on 20 October 1956[5] at Fort Worth, Texas, with Bell’s chief test pilot, Floyd Carlson, at the controls. Two more prototypes were built in 1957, and the Army had previously ordered six YH-40 service test aircraft, even before the first prototype had flown.[3][6] In March 1960, the Army awarded Bell a production contract for 100 aircraft, which was designated as the HU-1A and officially named Iroquois after the Native American nations.[7]
The helicopter quickly developed a nickname derived from its designation of HU-1, which came to be pronounced as “Huey”. The reference became so popular that Bell began casting the name on the helicopter’s anti-torque pedals.[2] The official U.S. Army name was almost never used in practice.[8] After September 1962, the designation for all models was changed to UH-1 under a unified Department of Defense (DOD) designation system, but the nickname remained.
While glowing in praise for the helicopter’s advances over piston-engined helicopters, the Army reports from the service tests of the YH-40 found it to be underpowered with the production T53-L-1A powerplant producing a maximum continuous 770 shaft horsepower (570 kilowatts).[N 1] The Army indicated the need for improved follow-on models even as the first UH-1As were being delivered. In response, Bell proposed the UH-1B, equipped with the Lycoming T53-L-5 engine producing 960 shp (720 kW) and a longer cabin that could accommodate either seven passengers or four stretchers and a medical attendant. Army testing of the UH-1B started in November 1960, with the first production aircraft delivered in March 1961.[3]
Bell commenced development of the UH-1C in 1960 in order to correct aerodynamic deficiencies of the armed UH-1B. Bell fitted the UH-1C with a 1,100 shp (820 kW) T53-L-11 engine to provide the power needed to lift all weapons systems in use or under development. The Army would eventually refit all UH-1B aircraft with the same engine. A new rotor system was developed for the UH-1C to allow higher air speeds and reduce the incidence of retreating blade stall during diving engagements. The improved rotor resulted in better maneuverability and a slight speed increase.[6] The increased power and a larger diameter rotor required Bell’s engineers to design a new tail boom for the UH-1C. The longer tail boom incorporated a wider chord vertical fin on the tail rotor pylon and larger synchronized elevators.
Bell also introduced a dual hydraulic control system for redundancy as well as an improved inlet filter system for the dusty conditions found in southeast Asia. The UH-1C fuel capacity was increased to 242 US gallons (920 liters), and gross weight was raised to 9,500 lb (4,309 kg), giving a nominal useful load of 4,673 lb (2,120 kg). UH-1C production started in June 1966 with a total of 766 aircraft produced, including five for the Royal Australian Navy and five for Norway.
Model 205[edit]
Main article: Bell 204/205

Typical armament for UH-1 gunship
Internal seating is made up of two pilot seats and additional seating for up to 13 passengers or crew in the cabin. The maximum seating arrangement consists of a four-man bench seat facing rearwards behind the pilot seats, facing a five-man bench seat in front of the transmission structure, with two, two-man bench seats facing outwards from the transmission structure on either side of the aircraft. All passenger seats are constructed of aluminum tube frames with canvas material seats, and are quickly removable and reconfigurable. The cabin may also be configured with up to six stretchers, an internal rescue hoist, auxiliary fuel tanks, spotlights, or many other mission kits. Access to the cabin is via two aft-sliding doors and two small, forward-hinged panels. The doors and hinged panels may be removed for flight or the doors may be pinned open. Pilot access is via individual hinged doors.[18]
While the five main fuel tanks are self-sealing, the UH-1H was not equipped with factory armor, although armored pilot seats were available.[18]
The UH-1H’s dual controls are conventional for a helicopter and consist of a single hydraulic system boosting the cyclic stick, collective lever and anti-torque pedals. The collective levers have integral throttles, although these are not used to control rotor rpm, which is automatically governed, but are used for starting and shutting down the engine. The cyclic and collective control the main rotor pitch through torque tube linkages to the swash plate, while the anti-torque pedals change the pitch of the tail rotor via a tensioned cable arrangement. Some UH-1Hs have been modified to replace the tail rotor control cables with torque tubes similar to the UH-1N Twin Huey.[18]

U.S. Navy[edit]
The US Navy began acquiring UH-1B helicopters from the Army and these aircraft were modified into gunships with special gun mounts and radar altimeters and were known as Seawolves in service with Navy Helicopter Attack (Light) (HA(L)-3). UH-1C helicopters were also acquired in the 1970s.[36][37] The Seawolves worked as a team with Navy river patrol operations.[38]
Four years after the disestablishment of HA(L)-3, the Navy determined that it still had a need for gunships, establishing two new Naval Reserve Helicopter Attack (Light) Squadrons as part of the newly formed Commander, Helicopter Wing Reserve (COMHELWINGRES) in 1976. Helicopter Attack Squadron (Light) Five (HA(L)-5), nicknamed the “Blue Hawks”, was established at Naval Air Station Point Mugu, California on the 11 June 1977 and its sister squadron, Helicopter Attack Squadron (Light) Four (HA(L)-4), known as the Red Wolves, was formed at Naval Air Station Norfolk, Virginia on 1 July 1976.[39]