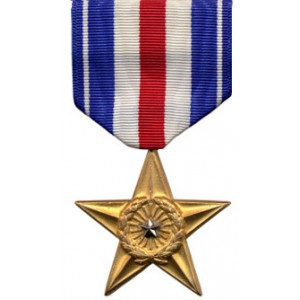 The President of the United States takes pleasure in presenting
The SILVER STAR MEDAL to
LCDR Michael B. O’CONNOR, Jr  United States Navy
For service as set forth in the following
CITATION

“For conspicuous gallantry and intrepidity in action while serving with Helicopter Attack (Light) Squadron THREE in the Republic of Vietnam on 29 April 1971. Lieutenant Commander O ‘CONNOR was serving as Aircraft Commander of a modified gunship used to insert United States Navy SEAL’s and Vietnamese LDNN on a vital intelligence mission. During the extraction attempt, the helicopters came under heavy enemy fire with two aircrew members critically wounded. To enable the other aircraft to escape, Lieutenant Commander O ‘CONNOR, with complete disregard for his safety, courageously maneuvered his aircraft through an intense anti-aircraft barrage, pinpointing enemy positions while returning devastating fire. After assuming tactical command of the other units, he orbited overhead the trapped SEAL’s despite intense machine gun fire and placed machine gun fire on the enemy, directing highly accurate strikes on enemy positions. With darkness compounding the hazards of the tiny landing zone and critically low on fuel and ammunition, he rapidly and professionally organized another attempt to rescue the besieged SEAL ‘s. Undaunted by intense enemy fire, he led the approach, placing fire on enemy gun emplacements at point-blank range. Despite the danger involved, he flashed his aircraft lights to keep the flight together. In the landing zone, he placed his ship in a position to shield the SEAL’s and other aircraft while his gunners returned the enemy fire. Lieutenant Commander O ‘CONNOR then led the aircraft out and, in a daring charge, directed mini-gun and door gun fire on the enemy positions. His courageous leadership resulted in the saving of many lives. Lieutenant Commander O ‘CONNOR’s devotion to duty, courage under fire and outstanding leadership were in keeping with the highest traditions of the United States Naval Service.”