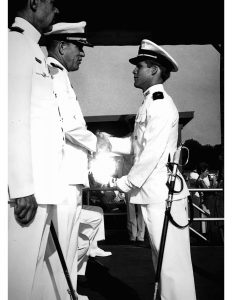 ANNAPOLIS — Three weeks ago, D. Marshall Love spoke to his son Jamie for the last time two days before the Navy pilot shipped out for the Persian Gulf.

The potential danger of his mission was foreshadowed only when the 31-year-old career naval officer described the boyish Marines he had seen on board his vessel.

“He said he had looked at the young Marines and felt a real concern for them,” the elder Mr. Love recalled yesterday. “It was a sombering feeling.”

Navy Lt. James H. Love of Arnold was identified yesterday as one of four men aboard a helicopter from the amphibious assault ship USS Tripoli that crashed Wednesday in the western Pacific Ocean about 700 miles northeast of Guam.

The UH1-N “Huey” helicopter was on a nighttime search and rescue training exercise when it went down around 7 p.m., said Lt. David Wray, a Navy spokesman in the Pentagon. Lieutenant Love was one of two pilots on board.

The body of one serviceman was recovered from the floating wreckage.

The three others, including Lieutenant Love, are still missing and, after an extensive search of the area, they are presumed dead.

The cause of the crash has not been determined, Lieutenant Wray said.

The helicopter deaths represented the 57th, 58th, 59th and 60th U.S. fatalities in the military buildup in the Persian Gulf region, according to the Defense Department. Of that total, 15 have been Navy personnel.

But for the family and friends of Jamie Love, the death was no mere statistic. To them, Lieutenant Love was a caring husband and father, an outstanding athlete and a strong-willed man who planned to become a Navy officer by the time he was in high school.

“When I learned what had happened I got angry and starting cursing,” said Bernie Miklasz, a St. Louis sportswriter and childhood friend. “It really brings home this gulf thing. It makes you angry and question whether it’s worth this kind of sacrifice.”

The third-eldest in a close-knit family with two brothers and three sisters, Lieutenant Love was remembered yesterday as a man who attacked life with great zeal.

Once, his father recalled, he scored seven goals in a single high school soccer game, a remarkable accomplishment in organized sports at any level.

Short and wiry, he once started a high-spirited wrestling match with a 6-foot 3-inch soccer teammate at least 50 pounds bigger — and won, a friend remembered.

“You always expected Jamie to go places,” said Patrick Harvey, 31, a Spalding classmate. “You knew he’d be at the top of whatever he did. He was always the best on the field in every sport.”

After graduation, he enrolled in the Naval Academy in nearby Annapolis and eventually became starting goalie on the academy’s lacrosse team.

But in his final year at the academy, he received what may have been the only tarnish on his otherwise sterling record.

In the fall of 1980, Mr. Love was expelled for his part in a scandal that drew nationwide attention.

A female mid allegedly had sexual intercourse with five male midshipmen in her room, and some of the encounters were recorded on 8mm film.

After losing an appeal of the expulsion in federal court, Mr. Love attended Towson State University and received a degree in 1982. He enrolled in officer training in Pensacola, Fla., earning a commission and later his wings. He married a Towson classmate, the former Cindy Harris of Annapolis, in September 1983.

“The whole episode was just so uncharacteristic,” said Mr. Miklasz. “I think he put it behind him. If it still hurt him, he internalized it.”

Initially stationed in Portsmouth, Va., Lieutenant Love was assigned two years ago to San Diego, where he taught helicopter pilots, his father said. Five months ago, he was assigned to the Tripoli.

Relatives and friends have planned a 2 p.m. memorial service today at St. Andrew by the Bay Roman Catholic Church on College Parkway in Cape St. Claire.

His father, a 59-year-old former Boy Scout leader who lives in the Broadneck Peninsula near Annapolis, said the military buildup in the gulf was a “tough decision” but did not blame President Bush’s policies for his son’s death.

From the April 1991 issue of Shipmate:

Lt. James H. Love USN was killed in an aircraft accident on 19 December 1990 while flying off the Amphibious Assault Ship TRIPOLI en route to the Persian Gulf.

Born on 23 June 1959 in Baltimore, Maryland, he was appointed to the Naval Academy from Maryland with the Class of 1981. He left the Academy and completed his degree at Towson State University, Towson, Maryland. He re-entered the Navy under the Aviation Officer Candidate program and won his commission on 13 August 1982.

After receiving his wings as a helicopter pilot, he was stationed with HC-8 at NAS Norfolk; he made two deployments to the Mediterranean and was awarded the Navy Achievement Medal.

In TRIPOLI, his assignment was in Air Operations.

James has a memory marker in Arlington National Cemetery.