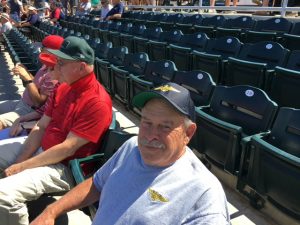 “Al (A.J. )Banford one of my closest friends was a special person who could light up a room with his presence and make everyone feel special.

A graduate of the Air Force Academy  in 1962 AJ saw the light and was commissioned in the Navy, received his wings in 1964 and was assigned to HU-2 in Lakehurst N.J.

AJ and I had a Medcruise  on Shangri-La  in 1965 along with Bob Jones and a great Det.After returning A.J.volunteered for duty in Viet- Nam with the yet to be established HAL-3 Seawolves. Enroute A.J served briefly with HC-1 and when arriving in Viet- Nam flew gunships with Army Units until HAL-3 was established. Upon establishment of HAL- 3 he was assigned to Det -4  and became  SeaWolf –  41 Actual. Earning  a DFC,over 40 Air – Medals and multiple Purple Hearts A.J. formulated the tactics for the SeaWolves .These tactics helped keep many of us who followed him alive.An excellent and fearless pilot and leader A.J. always exhibited the ability to get the operation done no matter how difficult or dangerous.

A.J. looked out for his shipmates always having their back.He loved his wife, family and  never wavered in his love of the U.S.A.

A.J. You were special and are sorely missed. RIP my friend!” CAPT MIke O’Connnor, USN (Ret.)

Alfred Joseph Banford, Jr. was born in Salem County, New Jersey on June 16, 1940 and died peacefully on November 2, 2022 surrounded by his family.  Al, Andy, AJ, Mr. Dennison, Uncle Al, and when in Italy, Alfredo, a man with many names, who was truly one of a kind.

A 1962 graduate of the United States Air Force Academy, AJ took his commission in the US Navy and served a combat tour in South Viet Nam flying Huey gunships for the Navy Seawolves of HAL 3. Among his many military honors, AJ received the Distinguished Flying Cross, Bronze Star Medal and three Purple Hearts. After serving 6 years in the US Navy, AJ moved to Incline Village and worked for Boise Cascade. During the 1970’s he formed Silver Pine Homes, a modular home manufacturer and contractor based in Stead, Nevada.

In 1975, Banford accepted a position as an advisor to the Saudi Arabia National Guard. Returning to Incline Village in 1976, AJ became a principal and general manager of the North Shore Club casino. After selling the casino in 1979, he and his partners bought Captain Jon’s Restaurant and the Tahoe Vista Marina. In the same year he formed The Radford Company, a full service, independent mortgage company based in Incline Village which he owned and operated for 43 years. As a three-time wounded warrior, he volunteered his service as a counsellor for the VA’s PTSD rehab program in Reno and was a member of the Incline Village/Crystal Bay Veterans Club.

AJ is survived by his wife, Karen Dennison, his cousin, Margie Goodier (John), his brother-in-law Bob Hodges and a loving extended family. He was preceded in death by his mother, Elizabeth L. Brown, his father, Alfred J. Banford Sr., his sister, Susan Hodges and his nephew, Andy Allen.

AJ was known for his irreverent wit, his generosity and his “larger than life” personality. He was an avid reader, an excellent cook, loved to travel to Maui and Italy and spend summers at Incline Beach. He looked forward to his daily coffee group fondly known as the OG’s (Old Guys). 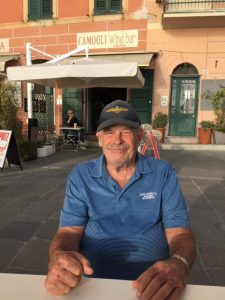