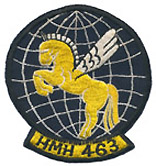 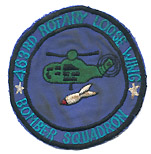 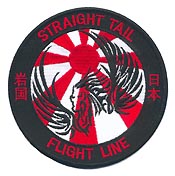 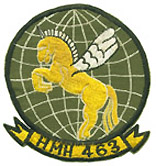 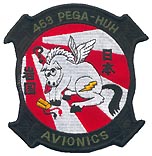 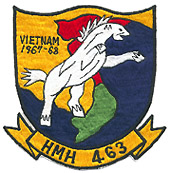 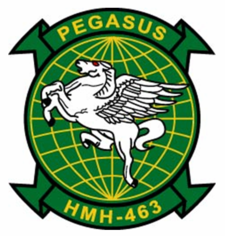 The mission of HMH-463 is to support the MAGTF Commander by providing assault support transport of heavy equipment, combat troops, and supplies, day or night under all weather conditions during expeditionary, joint, or combined operations.
Marine Heavy Helicopter Squadron 463 (HMH-463) is currently the only CH-53E squadron assigned to 1st Marine Aircraft Wing. The squadron falls under Marine Aircraft Group 24 located at Marine Corps Base Hawaii in Kaneohe Bay.
Since its original activation in 1944, HMH-463 has operated on both coasts of the continental United States and Hawaii. They have been deactivated three times and have served in three Marine Aircraft Wings.

Since its third activation in 1966, HMH-463 has been providing continuous assault support for United States Marines. The squadron was originally created as Marine Bombing Squadron 463, a fixed-wing bombing squadron, on July 20, 1944 at Cherry Point, North Carolina and assigned to Marine Aircraft Group 62, 9th Marine Aircraft Wing. In November 1944, the squadron was reassigned to Marine Aircraft Group 34. The following February, the squadron was reassigned to Marine Operational Training Group 81 only to be deactivated on February 28, 1945. On July 15, 1945, the squadron was reactivated at Santa Barbara, California as Marine Torpedo Bombing Squadron 463 and assigned to Marine Aircraft Group 51. The following year, on March 20, 1946, the squadron was once again deactivated and would remain so until 1958. The squadron was reactivated on September 1, 1958 at Santa Ana, California as Marine Helicopter Transport Squadron 463 and assigned to Marine Air Group 36, 3rd Marine Air Wing and then deactivated again less than a year later on June 30, 1959.
Marine Heavy Helicopter Squadron 463 was reactivated once again on March 1, 1966 at Santa Ana, California. It was assigned to Marine Wing Support Group 37, 3rd Marine Aircraft Wing. At the time, they were flying the CH-53A airframe. A four-plane detachment from HMH-463 deployed to Marble Mountain, Vietnam in December 1966. HMH-463 was reassigned to Marine Aircraft Group 16. The remainder of the Squadron would deploy during May 1967 to Marble Mountain where they participated in the Vietnam War for the next four years. During this historic deployment, HMH-463 earned the title the “Barrel Bombers”, after pioneering heliborne napalm drops. They also participated in operation Barroom, which later led to the creation of the film, “Dumbo Drop”. After the Vietnam War, HMH-463 relocated to Kaneohe Bay, HI in May 1971 and was reassigned to Marine Aircraft Group 24, 1st Marine Brigade.
In 1973, HMH-463 returned to Vietnam and participated in minesweeping operations in the Haiphong/Hon Gai Area of North Vietnam from February through July. The Squadron again returned in 1975 to participate in Operations EAGLE PULL and FREQUENT WIND during the evacuations of Cambodia and Saigon.
In August 1990, HMH-463 deployed to Saudi Arabia to take part in Operation DESERT SHIELD. The squadron remained in Southwest Asia to participate in Operation DESERT STORM before returning to Kaneohe Bay in March 1991.
Since Desert Storm, HMH-463 has served in numerous roles providing assault support throughout the world. In September 1992, HMH-463 participated in hurricane relief efforts for the island of Kauai, Hawaii in Operation GARDEN ISLE (Hurricane Iniki Relief). The squadron participated twice in Joint Task Force – Full Accounting in Cambodia, once from September to November of 1993 and again in February 1995. The squadron remained in Asia to participate in Exercise COBRA GOLD in Thailand, which continued through May 1995. In November 1996, HMH-463 deployed a four-plane detachment to Cairns, Australia in support of the President of the United States. A few years later in March 1997, the squadron embarked aboard the USS New Orleans to participate in Exercise TANDEM THRUST. During May 2001, HMH-463 sent a two-plane detachment to Mombasa, Kenya for Exercise NATURAL FIRE. In July 2001, HMH-463 deployed a four-plane detachment to Guam to participate in Operation KOA THUNDER. In June and July of 2002 the squadron served as the Aviation Combat Element for Hawaii Combined Arms Exercise 2-02 and Rim of the Pacific 2002.
In October 2002, HMH-463 deployed to Iwakuni, Japan as part of the Unit Deployment Program. During this six-month deployment the squadron participated in Exercise TALON VISION in the Republic of the Philippines during October 2002 and the Korean Incremental Training Program in Korea during November 2002. In February 2003, the squadron served as the Aviation Combat Element, for Special-Purpose Marine Air Ground Task Force 38, during the Philippines Interoperability Exchange in the Republic of the Philippines.
Marine Heavy Helicopter Squadron 463’s honors include the Presidential Unit Citation Streamer, Navy Unit Commendation Streamer with three bronze stars, Meritorious Unit Commendation Streamer with one silver and two bronze stars, World War II Victory Streamer, National Defense Service Streamer with two bronze stars, Armed Forces Expeditionary Streamer, Vietnam Service Streamer with two silver and one bronze star, Southwest Asia Service Streamer with two bronze stars, Vietnam Cross of Gallantry with Palm Streamer, and the Vietnam Meritorious Unit Citation Civil Actions Streamer. Since its original activation, Marine Heavy Helicopter Squadron 463 has served in numerous roles for the Marine Corps. Flying the CH-53E Super Stallion, the United States military’s largest helicopter, HMH-463 continues to provide unparalleled assault support for Marine ground forces throughout the Pacific.