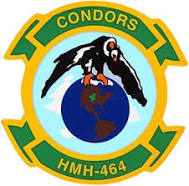 During Jan and Feb 1987, the Squadron demonstrated the unique support capability of the CH-53E by establishing Forward Area Refueling Points (FARPs) on austere island sites unsuitable for KC-130 operations. The Condors aerial refueled and ground refueled AH-1 helicopters from HMLA-269 enroute to and from Puerto Rico. In November 1987 the Condors deployed to Guantanamo Bay, Cuba, conducting external lift operations and providing FARP support. The squadron was proud to be honored by the Marine Corps Aviation Association as the recipient of the Commandant’s Aviation Efficiency Trophy for 1987.

During 1989, HMH-464 participated in ALPINE WARRIOR at Volk Field, WI. The Squadron validated the Marine Expeditionary Brigade (MEB) concept by deploying six CH-53E’s via C-5 aircraft to Bardufoss, Norway. Upon reassembly the Condors participated in Exercise COLD WINTER throughout northern Norway, surpassing the 10,000 accident free hour mark while externally lifting M198s and other FMF equipment in support of the 4th MEB. In Jan 1990, HMH-464 supported two Marine Expeditionary Units (MEU) detachments while the remainder of the Squadron deployed to Volk Field for Exercise ALPINE WARRIOR. When Iraq invaded Kuwait, HMH-464 stood ready, providing eight CH-53Es and 84 highly trained Marines for the initial deployment to the Persian Gulf on 16 August 1990.
Arriving in Saudi Arabia just a few weeks before Operation DESERT SHIELD evolved into DESERT STORM, the squadron played a key role in providing assault support to First Marine Division as they prepared to liberate Kuwait. HMH-464’s mobility was tested by three displacements in less than three months. The Condors flew 304 combat sorties, delivered 2,167,150 pounds of cargo and transported 1,686 passengers. The Squadron returned from Southwest Asia in May 91 and soon surpassed the 15,000 hour mishap free milestone.

In the summer of 1996 Condors assigned to HMH-162 (REIN) conducted a Non-Combatant Evacuation Operation in the war torn country of Liberia. In June 1997, the squadron deployed six aircraft via strat-air to Rio de Janeiro, Brazil in support of the President of the United States. During the period Apr-Jun 1999 the squadron supported the Commandant’s Limited Objective Experiment “URBAN WARRIOR” providing the heavy lift piece of the experiment. The Condors provided heavy lift support to the local community after the devastating effects of hurricane Floyd.

From Mar-May 2000 the squadron was involved in a classified mission, which required short notice deployment of five helicopters via both aerial refueling and US Navy Shipping to participate in Operation Eastern Access on the island of Vieques, Puerto Rico. Also in May the squadron was awarded the CNO Aviation Safety Award. In Sept 2000, the Condors were awarded the 2000 MCAA Marine Helicopter Squadron of the Year. Additionally, HMH-464 provided heavy lift support to Eglin Air Force Base when a section moved a pair of fully functional 30,000 pound F-15s from Duke Field to one of the outlying test ranges.

Following the attacks on the US, September 11, 2001, the HMH-464 detachment assigned to HMM-365 and the 26th MEU, supported Task Force 58 and provided three of the six aircraft and crews which made the historic flight from the USS Bataan off of the coast of Pakistan over 800NM into Afghanistan to seize Camp Rhino, and a few weeks later, seized Kandahar Airport. This raid constituted the first conventional forces in country. From Nov, 2011 – Feb 2012, the detachment operated ashore with the MEU and supported Operation ENDURING FREEDOM (OEF). From Jan – Apr 2002, HMH-464 supported multiple Capability Exercises (CAPEX), a Type Commanders Amphibious Training (TCAT), Carolina Thunder II, and III and the Congressional Marine Day at MCB Quantico, conducted “para-ops” with 2nd Recon, and troop lift for the newly designated 4th MEB (Anti-Terrorism).

In Jan 2003, HMH-464 deployed aboard ship with all 16 aircraft in support of OEF. From March to April 2003, HMH-464 provided combat assault support in support of Operation IRAQI FREEDOM (OIF). During the initial phase of OIF I in April 2003, Condors assigned to HMM-264 (REIN) participated in the seizure of the Mosul Airport. The security and control of this airfield was critical to following operations conducted by the 101st Airborne Division. From 2003 to 2005, HMH-464 continued to send forces forward in support of Theater Support Cooperation Exercises, OEF, OIF, and the Horn of Africa. From 2006 – 2007, HMH-464 continued their support by sending two detachments to the Horn of Africa as well as supporting the 24th MEU in 2006 and 22nd MEU in 2007.

In addition to HMH-464’s continuing support in the Horn of Africa, 2008 saw the Condors join Operation Continuing Promise in the Caribbean. In the midst of this operation several hurricanes devastated Haiti. HMH-464 immediately responded . During this period, HMH-464 delivered over 1 million pounds of relief supplies to the people of Haiti. From 2009 to 2011 HMH-464 continued to provide excellent assault support, simultaneously providing detachments for the Horn of Africa, a MEU, and half of the squadron to augment HMH-361 in Afghanistan for OEF.

In early 2011, the squadron swelled to over 500 personnel and 32 aircraft having absorbed detachmetns and aircraft from HMH-461, our forward deployed sister squadron. In July, with a detachment in the Horn of Africa and a detachment preparing for the 24th MEU, HMH-464 deployed to Afghanistan in support of OEF with augmentation from HMH-462. From 1 Aug, 2011 to 7 Feb 2012, HMH-464(-)(REIN) executed 166 named operations missions, working with 23 different U.S. and coalition forces. The Condors directly enabled the capture or destruction of over $1 Billion worth of drugs and funds that were no longer able to finance the insurgency. The Condors also served as the critical lift element for operation EASTER STORM into Kajaki. While deployed, the squadron carried 35,000 passengers, over six million pounds of cargo and flew over 4,100 flight hours.