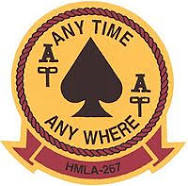 Marine Light Attack Helicopter Squadron 267 was activated 15 February, 1944 at Quantico, VA as Marine Observation Squadron 5. The operational aircraft at the time was the OY-1 “Grasshopper.” In April 1944, the unit was relocated to Camp Pendleton to prepare for its August deployment to Ewa, Hawaii and assignment to the 3D Marine Aircraft Wing for further deployment to combat operations in the Pacific. After participating in the Iwo Jima Campaign, the Squadron was relocated to Hilo, Hawaii in April of 1945. In June of the same year, VMO-5 was assigned to Marine Observation Group 1, then reassigned in August to the 2nd Marine Aircraft Wing. The following month, the Squadron deployed to Sasebo, Japan and participated in the occupation of Japan from September of 1945 to January of 1946. Upon completion of its occupation duty, VMO-5 returned to San Diego and was deactivated.
With the upswing of the Vietnam War, VMO-5 was reactivated in December of 1966 at Camp Pendleton and assigned to Training Group 30, 3D Marine Aircraft Wing. The aircraft assigned were the UH-1E “Huey” and the OV-10 “Bronco.” In July 1967, VMO-5 was reassigned to Marine Aircraft Group 56. The Squadron was re-designated HML-267 in March 1968 and remained in combat readiness for the remainder of the war. In November of 1971 the Squadron was reorganized resulting in HML-267 solely flying the UH-1E aircraft. The Command received its first complement of UH-1N “Hueys” in March 1976 and completed transition to all UH-1N aircraft by December of the same year. In November 1979, HML-267 expanded operations to both sides of the Pacific by rotating one third of its assets every six months from Camp Pendleton to Marine Corps Air Station, Futenma, Okinawa, Japan. In February 1982, the Squadron again began operating with two types of aircraft when the UH-1N “Hueys” were joined by AH-1J “Cobras.” Beginning in May 1983, the “Huey/Cobra” team began deploying to Okinawa, Japan as part of the Unit Deployment Program. During these six-month deployments, the Squadron participated in numerous training exercises including detachments to Korea, Guam, the Philippines, Hong Kong, and Iwo Jima. In February 1987, the Squadron was re-designated as HMLA-267, and in March 1987, received its first AH-1W, “SuperCobra.”
HMLA-267’s mission is to support the MAGTF Commander by providing offensive air support, utility support, armed escort and airborne supporting arms coordination, day or night under all weather conditions during expeditionary, joint or combined operations.
HMLA-267 has been awarded numerous honors and decorations which include: Presidential Unit Citation, Meritorious Unit Commendation with Bronze Star in lieu of second award, Asia-Pacific Campaign Streamer, World War II Victory Streamer, Navy Occupation Service Streamer, and National Defense Service Streamer. In 2003, the Squadron received the MCAA John P. Giguere Squadron of the Year Award.
Today, HMLA-267 continues its dedicated service supporting every MEU originating from San Diego and Japan. The Squadron is now comprised of over 389 Marines and Sailors, and remains poised to support our Country’s call to duty “Any Time, Any Where.”