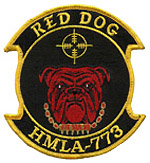 The squadron was originally established in September 1958 as Marine Helicopter Transport Squadron 773 (HMR-773) at Naval Air Station Grosse Ile, Michigan and assigned to the Marine Air Reserve Training Command.[3] They operated the Piasecki HUP-2 Retriever which were shared with the Naval Reserve. On April 1, 1962, the squadron was redesignated Marine Medium Helicopter Squadron 773 (HMM-773). Four months later August 31 the squadron was deactivated.
On April 15, 1968, HMM-773 was reactivated at Naval Air Station Los Alamitos and assigned to Marine Aircraft Group 46 of the 4th Marine Aircraft Wing. The squadron’s personnel and aircraft, HUS-1 Sea Horses, came from sister squadron HMM-764. HMM-773’s existence was short-lived; the squadron deactivated in September 1969.
On September 1, 1971, Marine Attack Helicopter Squadron 773 (HMA-773) was stood up at Marine Corps Air Station El Toro. The squadron was assigned AH-1G Cobras, many of which had seen action with Marine squadrons in Vietnam. HMA-773 relocated to NAS Atlanta, Georgia during June 1976, absorbing the personnel of HML-765 which had just been deactivated. In late 1978, HMA-773 transitioned to the twin engine AH-1J Sea Cobra which they operated for the next fourteen years.

Bell AH-1G Cobra of HMA-773 squadron at NAS Atlanta in 1976
In November 1990, HMA-773 was the first reserve helicopter squadron to be activated and deployed to the Persian Gulf in support of Operation Desert Shield and Operation Desert Storm. While embarked aboard the USS New Orleans and USS Tripoli, the squadron distinguished itself with mine sweeping escort and combat missions during the war. In recognition of their exemplary performance during combat HMA-773 received the Navy Unit Commendation.
In the fall of 1992, the squadron received eight, state of the art AH-1W SuperCobras. In November 1993, HMA-773 began receiving UH-1Ns and personnel from other disestablished units. In October 1994, HMA-773 reorganized and re-equipped with the addition of the UH-1N utility helicopter, pilots, and personnel from HML-776, NAS Glenview, Illinois. Having re-designated as a Marine Light Attack Helicopter Squadron 773, the squadron now mirrored the active duty HMLA structure and enabled rapid total force integration for current and future combat and contingency operations.
Since reorganizing, the “Red Dogs” of HMLA-773 have deployed on numerous counter narcotic operations throughout the United States, the Caribbean, and the West Indies. In May 1995 the Squadron deployed to the island nation of Antigua for the first in a series of “Weed eater” marijuana destruction missions. They have further developed their eradication tactics on the islands of St. Kitts-Nevis, St. Lucia, Trinidad and Tobago, Grenada, and Nassau, Bahamas. HMLA-773 counter-narcotics missions in the United States have included joint operations with the Army, Coast Guard and several US Law Enforcement Agencies in Kingsville, Texas, El Paso, Texas, Naco, Arizona, Palm Beach, Florida, and El Centro, California. In the space of two years, the Red Dogs aided in the destruction of over $20 billion worth of illegal narcotics.