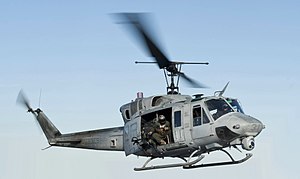 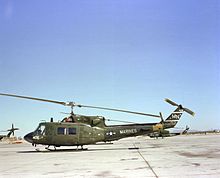 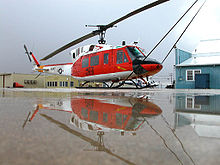 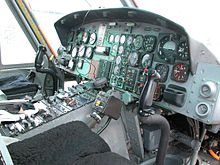 The Bell UH-1N Twin Huey is a twin-engine medium military helicopter. A member of the numerous Huey family, it first flew in 1969. The CUH-1N Twin Huey (later CH-135 Twin Huey) was the original version, first ordered by the Canadian Forces.
The UH-1N has a fifteen-seat configuration, with one pilot and fourteen passengers. In cargo configuration it has an internal capacity of 220 ft³ (6.23 m³). An external load of up to 5,000 lb (2,268 kg) can be carried. The UH-1N was later developed into the civil Bell 212.[1]

Based on the stretched fuselage Bell 205, the Bell 212 was originally developed for the Canadian Forces (CF) under the designation CUH-1N Twin Huey. Later the CF adopted a new designation system and the aircraft was re-designated CH-135 Twin Huey.[2] The CF approved the development of the aircraft on 1 May 1968[1] and purchased 50 aircraft, with deliveries commencing in May 1971.[3]

Canadian CH-135 Twin Huey serving with 408 Tactical Helicopter Squadron, 1985
The US military came very close to not procuring the Twin Huey. The purchase of the aircraft for US military use was opposed by the Chairman of the House Armed Services Committee at the time, L. Mendel Rivers. Rivers took this position because the aircraft powerplant, the Pratt & Whitney Canada PT6T was produced in Canada. The Liberal Canadian government of the time had not supported US involvement in Vietnam and had opposed US policies in southeast Asia, as well as accepting US draft dodgers. Rivers was also concerned that procurement of the engines would result in a trade deficit situation with Canada. Congress only approved the purchase when it was assured that a US source would be found for the PT6T/T400 engines. As a result, the United States military services ordered 294 Bell 212s under the designation UH-1N, with deliveries commencing in 1970.[3]
Unlike in the Canadian Forces, in US service, the UH-1N retained the official name “Iroquois” from the single–engine UH-1 variants, although US service personnel refer to the aircraft as a “Huey” or “Twin Huey”.[4]
The Bell 412 is a further development of the Bell 212, the major difference being the composite four-blade main rotor.[3] The UH-1N has also been developed into the upgraded, four-blade UH-1Y.[5]

The UH-1N’s main rotor is powered by a PT6T-3/T400 Turbo Twin Pac made up of two Pratt & Whitney Canada PT6 turboshaft engines that drive a single output shaft. They are capable of producing up to 1,342 kW (1,800 shp). Should one engine fail the remaining engine can deliver 671 kW (900 shp) for 30 minutes or 571 kW (765 shp) enabling the UH-1N to maintain cruise performance at maximum weight.[3]
The United States Marine Corps (USMC) modified a large number of their UH-1Ns with a Stability Control Augmentation System (SCAS) which provides servo inputs to the rotor head to help stabilize the aircraft during flight. This modification removed the gyroscopic “Stabilization Bar” on top of the main rotor head, instead relying on the computer system for stability.

From late 1970, the UH-1N re-equipped the USAF 20th Special Operations Squadron in Vietnam, replacing the single-engined UH-1F and UH-1P. Armed with miniguns (or 40 mm grenade launchers) and rocket pods, and painted camouflage with no US markings and only a Green Hornet insignia, the UH-1N supported Special Forces reconnaissance missions from Cam Ranh Bay.[6]
The United States Air Force employs UH-1Ns to fulfill its ICBM mission, providing a utility helicopter for transport between bases such as Minot AFB, Francis E. Warren AFB and Malmstrom AFB to missile launch sites in North Dakota, Montana, Wyoming, Nebraska, and Colorado. The UH-1N is also used by the 36th Rescue Squadron (36 RQS) at Fairchild AFB, WA for conducting Search-and-Rescue (SAR) and medical evacuation missions, as well as the 459th Airlift Squadron based at Yokota Air Base in Japan.
During the 1982 Falklands War, the Argentine Air Force deployed two Bell 212s to Goose Green grass airstrip from where they performed general support duties including the recovery of many downed pilots. By the end of the hostilities both aircraft were still intact but were dismantled by the Argentinians.[7][8]
USMC UH-1Ns were used by the USMC during its 2003 invasion of Iraq. UH-1Ns provided reconnaissance, and communications support to Marine ground troops. They were also called upon to provide close air support during heavy fighting in Nasiriyah.[9]
In August 2013, the Air Force said they were close to finalizing a plan to sustain and modernize their UH-1Ns for the next six to ten years. The plan was to sustain the fleet, address flight and safety mandates, investigate modest improvements in capabilities, and reduce capability gaps. While the Huey is one of the oldest platforms in the service, keeping the fleet going was seen as having “minimal risk.” Fleet-wide upgrades included night vision compatible cockpit lighting, crash worthy seats for flight engineers, and installation of a helicopter terrain awareness warning system and traffic collision avoidance device. The Air Force was also in the process of further acquiring ex-Marine Corps UH-1N models. The Marines were working out a strategy to transfer as many as 26 helicopters to the Air Force to either add them to their active fleet or keep them in reserve.[10]
The UH-1N has seen combat service in the Colombian armed conflict. On 16 October 2013, an UH-1N helicopter crashed in the northern La Guajira department.[11] The zone of the crash is a hotbed of FARC rebel activity.[12][13]
The U.S. Marine Corps planned to retire the UH-1N Iroquois by September 2014 after 43 years of service. HMLA-773 (Marine Light Attack Helicopter Squadron 773) was the last Marine squadron operating them, with their last deployment occurring in 2013 where two helicopters sailed on a Royal Netherlands Navy ship for an African Partnership Station deployment. Deliveries began to the Navy and Marine Corps in 1971 totaling 205 UH-1Ns and six VH-1N executive transports for Marine Helicopter Squadron One. The UH-1N was replaced by the upgraded UH-1Y Venom; ten are remanufactured N-model airframes, after which the Marines decided to procure new-built Y-model airframes. Five unarmed HH-1N versions remained in use by the Marines until they were also replaced by UH-1Ys and retired in 2015, the only HH-1Ns remaining from 44 that were converted from 38 UH-1Ns and the six VH-1Ns.[14] The last combat deployment of the UH-1N by the Marines was to Afghanistan in 2010. The Marines retired the UH-1N during a “sundown ceremony” at Naval Air Station Joint Reserve Base New Orleans on 28 August 2014.[15][16]
In March 2013, the U.S. Air Force operated 62 UH-1N Hueys: 25 provide security at ICBM sites; 19 are stationed at Joint Base Andrews to evacuate Washington-based government officials in emergencies; and 18 are used for testing and training. Since most were purchased in 1969, the Air Force has been seeking a replacement.[17] Prime candidates include the Sikorsky HH-60U version of the UH-60 Black Hawk and the Boeing/Leonardo MH-139 version of the AW139; the requirement is for 84 helicopters.[18] On 13 July 2017, the Air Force released a request for proposals for a UH-1N replacement. A contract is to be awarded in 2018, with initial operational capability in 2020.[19]

UH-1N Iroquois
Initial production model, used by the USAF, USN, and USMC. Over the years the primary operators, the USMC has developed a number of upgrades for the aircraft including improved avionics, defenses, and a FLIR turret. The USAF planned to replace their UH-1Ns with the Common Vertical Lift Support Platform to support the service’s ICBM activities,[20] but is now examining a life extension for their current fleet.[21]
VH-1N
VIP transport configuration[1]
HH-1N
SAR variant.[1]
UH-1Y Venom
A UH-1N replacement and upgrade as part of the H-1 upgrade program for the USMC, designed to coincide with a similar upgrade for the AH-1W attack helicopter to AH-1Z Viper standard, with common engines and other major systems.