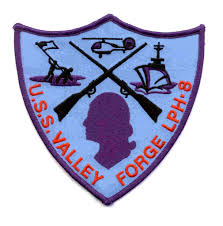 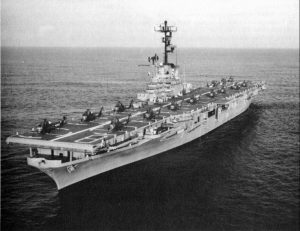 During my tour on the USS Valley Forge (LPH-8) in 1968 off the coast of Vietnam, I was the crew chief of “Bearcat One,” the Valley Forge’s ships helicopter, an H-34. One of our Marine H46’s from Marine Medium Helicopter Squadron HMM-164 “Flying Death”  was sent to Danang to pick up passengers and mail. 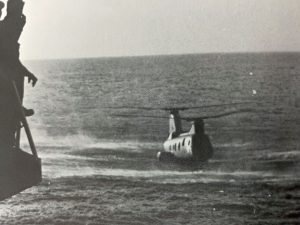 The Marine pilot was a brand new HAC. After lifting off with a large amount of mail and about 14 passengers, he lost some power on one engine. Still airworthy, he continued to head for the VALLEY FORGE which was about 60 miles away near the DMZ.

Upon making his approach to the VALLEY FORGE, he lost power on his other engine and ended up in the drink. Keeping in mind that his rotors were still turning, and he was still afloat, the beach was only about a mile away.  I never understood why he didn’t just water taxi to the beach. (See photo.)

By this time, half the ship’s company was on the flight deck watching this event.   We launched Bearcat one, The USS Valley Forge’s Ship’s SAR Helo, an H-34 and were hovering aft of the H46 in the water waiting for people to disembark, At the same time, the Ships Bosin, a W4 launched the ship’s lifeboat. As a side note, this Bosin hated “Airedales” and “Helicopters” in particular. When the Bosin launched the life boat, it capsized, and now we had six new people in the water.

As the H46 tried to lighten ship to get airborne, things started coming out back of the H46, (no passengers were in the water yet.) Every time something else got thrown out of the H46, a big cheer would come from the flight deck, until they started throwing out the mail. You can imagine the VALLEY FORGE crews response to that.

After lightening ship as much as they could, out came the passengers one by one. I had a rescue crewman’s dream, never saw so many bodies in the water at one time. We picked up all these guys (maybe about 16 counting the crew), but the best was yet to come. It appeared one of the passengers was drowning and had gone under twice when I told the pilot I had to get this guy right away. Before he could answer, I removed my helmet and jumped. (See photo.) 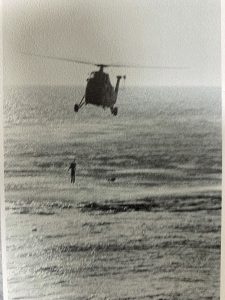 Since my view was at open water with no horizon, I didn’t have any idea how high we were (see photo.) It was only after I got back to the ship that someone told me we must have been about 100 feet as we were higher than the flight deck (80 feet.) All I remember was, it is sure taking a long time to get to the water. As it turned out, I got the guy in the water into the horse collar, and the pilot hoisted him up and then came back for me.

One of the people I picked up that day was the ship’s Bosin, and he was not too happy to see me.

You would think this story is over, but the best part is yet to come. After all crew and passengers had got out of the H46, the pilot lowered the door just aft of the cockpit. The H46 was now still turning, and I suppose he had locked the controls up, as he stood on the steps of the door, he had his helmet on and a camera around his neck. He removed his helmet, threw it in the water, saluted the flight deck, and a big cheer went up. Next, he opened the cover of his camera, checked the light reading and proceeded to take several pictures of the people on the flight deck (with cheers from the ship’s crew.)

Last but not least, he now removes the camera from around his neck, salutes again (another cheer from the flight deck) and throws his camera in the water, jumps in, and swims away. I picked him up and right on cue, the H46 goes to Davy Jone’s locker. 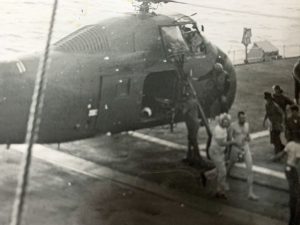 Before we returned to the ship, I took off my wet flight suit, got out of Bearcat One and the V1 Chief (my friend) didn’t recognize me in my underwear and tried to take me to sickbay thinking I was a survivor (see photo). All in all, an exciting day.